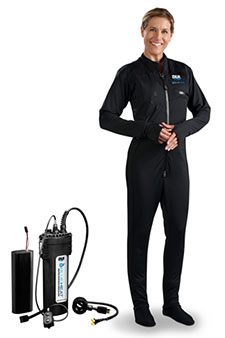 Several years ago when I first heard about Diving Unlimited International (DUI) working on making an electric suit, I was pretty excited! I thought about those long days teaching out at the lakes with back to back classes or those seemingly long safety stops in the Great Lakes in 40 degree water and how much more enjoyable it would be.

Flash forward a few years and the Blue Heat has arrived. It’s an electric heated suit that goes under your drysuit. The suit features 4 heated pads in the torso and even has optional wire routing for their electric heated gloves and sox.

Many D.U.I. Drysuit owners have already tried the Blue Heat system on one of the DUI Demo Tours. But testing the system out in the middle of summer on a quick 20 minute demo dive is one thing… Doing it in water that is 1 degree away from becoming solid is another.

I wanted to put this system to an extreme test. I took the Blue Heat to Crobsy, MN in the middle of one of our coldest winters and took it under 2 feet of ice. 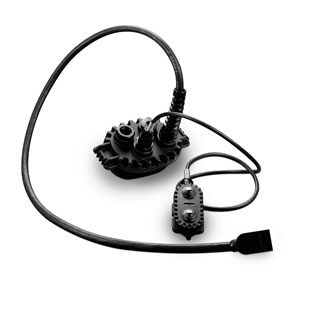 The Blue Heat preformed great and lived up to it’s name. It was very warm on theblueheat controller highest setting. I could see this suit being a great option getting ready and suiting up even on very warm days. Wearing very minimal undergarments you could easily avoid sweating while gearing up and hauling your gear to the waters edge.

My only real complaint was on really sunny days, it was hard to read the little LED control display letting me know what setting it was on. The battery pack is a little bulky but once you’re in the water you can’t even tell it’s there. Overall the suit comfortable and warm. I really enjoyed the suit and would highly recommend the suit to our local divers! Watch the video below to see the Blue Heat in action.

There are many great dive destinations in the Caribbean. One of our favorites is Cozumel Mexico! Cozumel is known for its drift diving. Just relax and drift along the beautiful reefs that explode with a orange and red colored coral as well as a wide variety of marine life.

Cozumel waters are loaded with turtles, stingrays, eagle rays, moray eels, nurse sharks, and various species of reef fish. Night diving is incredible whether you dive from boat or shore. Lobster, crab, octopus, and reef squid are just a few types of marine life you can expect to see. Our favorite night dive site is Paradise Reef which we renamed Octopus Playground! We typically see numerous octopus on these night dives!

Check out this video on what you can expect to see on a typical full day of diving in Cozumel.